10 Standouts at the London Design Festival 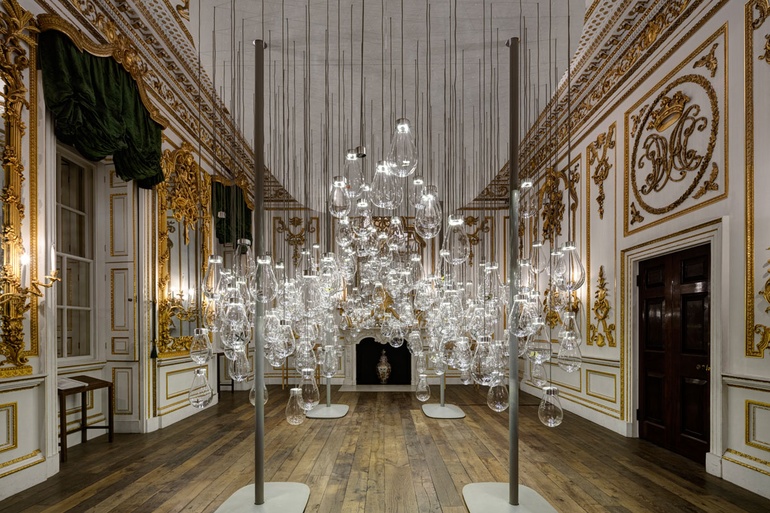 It’s been a busy couple of weeks in London with the 13th annual London Design Festival overlapping with London Fashion Week , the London Festival of Film and the start of the “art season” that includes LAPADA and Frieze London . Maybe because of this the boundaries of the design festival seemed more blurred than ever. The packed schedule of nearly 400 events crossed a multitude of disciples—architecture, art, film, fashion and much, much more. While there are still destination shows in the festival that heavily feature furniture, it’s far from the cornerstone of the schedule. Extraordinary installations, events and pop ups with impeccable art direction and a huge dose of conceptual thinking are now the draw for those in the know. So, what were the highlights?

The V&A Museum has always been a heavyweight player and this year it delivered some unmissable installations. Highlights included 3,000 porcelain ornaments that formed the impressive Tower of Babel by Barnaby Barford , who cycled around London for the past two years photographing shops ranging from iconic London landmarks like Fortnum and Mason’s to derelict high street stores. The photos were made into small bone china ornaments, all stacked and carefully balanced into a 20-foot-high tower. All the ornaments are for sale and available after the tower has been dismantled.

Also at the V&A, London-based Norwegian designer Kim Thome along with Swarovski built a 60-foot aluminum totem structure called Zotem , studded with 600 color-changing crystals. Rising from the atrium's entrance up towards the contemporary ceramics gallery, the light created a sparkling prismatic reflection on the floor, stopping crowds in their tracks as they entered the museum.

As part of the "Small Discoveries" series for Perrier-Jouët , Curiosity Cloud by Mishler-Traxler suspended buzzing insects in hand-blown glass globes made in partnership with renowned Viennese crystal maker Lobmeyr . Inside each vessel, a variety of hand-fabricated insects seemed to flutter, increasing their tapping against the glass as viewers moved closer for a better look.

The superb interactive, self-guided Cloakroom installation by Faye Toogoode , also at the V&A, involved 150 Kvadrat foam coats containing maps that sent visitors on a scavenger hunt throughout the museum's galleries, where Toogoode had installed 10 overcoatlike sculptures made from materials such as marble, leather and wood. The coats represented 10 British manufacturers according to production processes, such as The Wood Carver, The Stone Mason and The Blacksmith.

In Da House by Camille Walala at Aria was one of the most talked about installations in interior design circles and was equally a sensation on Instagram. The jaw-dropping takeover by Memphis-obsessed illustrator and muralist Camille Walala covered the store’s facade in one of her loud graphic patterns that she calls "Tribal POP". She also launched a brand new collection of homewares in equally powerful patterns.

Somerset House has been building its presence in the London Design Festival over the last couple of years and this year it became a major destination, showcasing several collaborations between designers and brands. A whole “wing” was occupied by 10 Designers in the Westwing , which included Faye Toogood 's Drawing Room and the influential Patternity ’s 3D installation of monochrome graphics Connected by Pattern with Paperless Post . Another visitor favorite was The Wave by Santa Barbara designer Alex Rasmussen for Neal Feay . The modular structure made from 650 aluminum panels only took three weeks to develop and filled a whole room. Quite a crowd gathered to walk on its wavelike structure.

Hands-on demonstrations and interactive displays were a key feature in this years London Design Festival and over at The Future Laboratory , Benchmark and 1882 Ltd revealed the brands’ latest collections and collaborations taking visitors on a journey through material and process in The Factory, from slip casting to wood turning.